Reports of another Cash-in-transit (CIT) robbery has been circulating on social media, along with the video (included below.) The short 45-second video clip was taken from within what appears to be a convenience store.

CIT Robbery in Macassar – What we know

Shoppers can be heard screaming in the background before the camera focuses on a robbery taking place outside the store. As reported by Bosbeer on Twitter, the CIT vehicle was robbed in Macassar, Cape Town.

“This happened a short while ago. Suspect fled the scene with an undisclosed amount of money towards Stellenbosch”.

#CITRobbery Cash van robbed in Macassar, Cape Town. This happened a short while ago. Suspects fled the scene with an undisclosed amount of money towards Stellenbosch.. @BOSBEER2006 @1SecondLater @MARIUSBROODRYK @News24 @SAPoliceService pic.twitter.com/AMYuDH9huL

The money has apparently been recovered. Suspects currently on the run in Kayamandi area, Stellenbosch. Avoid the area as more shoot outs are likely. pic.twitter.com/uN7rtr28d7

In response to the video on social media, one netizen said the “money has apparently been recovered”. The user advised residents to avoid the area “as more shootouts are likely”. The netizen, Brandaan Huigen, added:

“Suspects currently on the run in Kayamandi area, Stellenbosch”.

According to RTC South Africa, the getaway vehicles – an Audi with registration CA 459 194 – was found abandoned in Kayamandi, Macassar. Authorities also found guns in the vehicle.

The following photo of the scene of the crime was shared by Yusuf Abramjee on Twitter.

This is a developing story, more to follow. We’ve reached out to authorities for comment and will update this article once confirmation has been received. 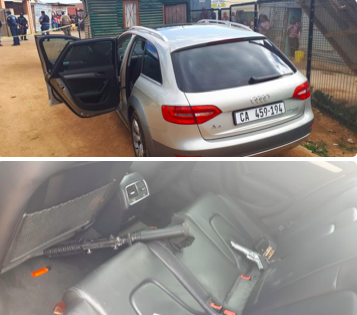 Kaizer Chiefs will NOT be relegated, says a confident Daniel Akpeyi
Quavo Reportedly Did Not Take Back The Bentley He Gifted Saweetie
Mercy Johnson Shares Christmas Family Photos
US politician Joe Biden recalls being arrested in SA for trying to see Nelson Mandela
Pollution disaster looms for Mauritius due to oil spill
Iranian President Promises Revenge After U.S Attack