In nominal terms, the average South African’s monthly take-home pay increased by 4.7% to an average of R15 821 in February 2021, according to the latest BankservAfrica Take-home Pay Index (BTPI).

However, the payments provider notes that in real terms -accounting for inflation – the average salary citizens were pocketing was R13 044. That’s an increase of just 1.6% above the rate of inflation.

THE INCREASE IS INFLUENCED BY LOWER EMPLOYMENT IN SOUTH AFRICA

The automated payment-clearing house stressed that the increase in take-home pay was a reflection of fewer daily and weekly paid employees in the system.

“While this ‘good’ news is welcomed, not all of the increases for average wages were due to actual wage increases. Instead, this is due to the fewer number of daily and weekly paid employees in the system and their decline in the overall BTPI data,” said BankServ in a statement.

The system contained a far lower share of paid employers, as the average decline of the monthly equivalent of daily wage earners declined by 10.6% – and monthly paid workers decreased by 2.8%.

When this reduction in employees is accounted for, the real increase in value of take-home pay for employees registered in the system only increased by a measly 0.2%

Shergeran Naidoo, BankServAfrica’s Head of Stakeholder Engagements, said: “The low inflation rate together with the better performing economy in February certainly contributed to this.”

The lower employment figures were a concern for Mike Schüssler, the Chief Economist at economists.co.za. However, he noted that their data indicated that this was the first time that the overall salaries paid to South Africans, via BankServAfrica, showed a positive increase since May 2020.

Schüssler added that the increase in take-home pay probably “contribute[d] to better consumer spending in February.”

“While it’s too early to predict how it may unfold in the months to come, we can, on the take-home pay side, confirm that the declining trend in total salaries appears to have reached an end,” he concluded. 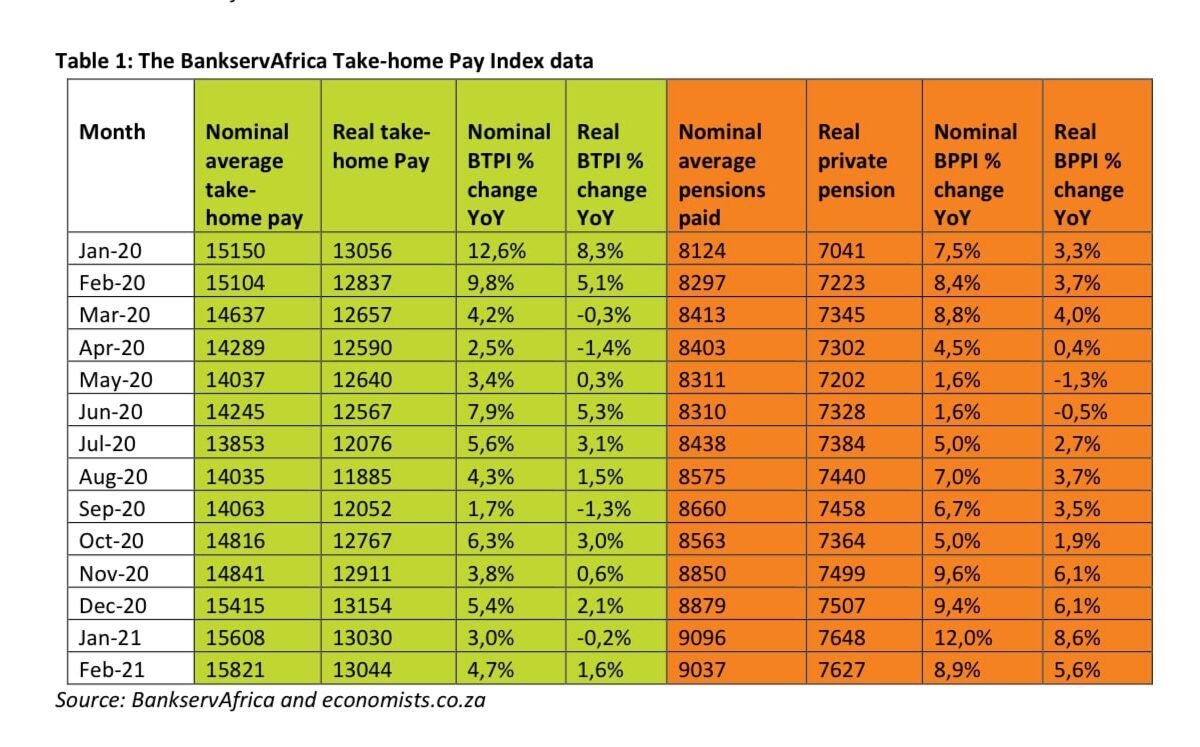