After a busy weekend, we’re beginning a new week in lockdown. But there’s plenty to sink your teeth into on Monday 22 February, and the news comes thick and fast this morning. Jacob Zuma continues to dominate the headlines across South Africa, as possible routes out of lockdown and developments with SAA also catch the eye.

In a statement released by the Jacob Zuma Foundation, Msholozi has lashed out at the courts of South Africa once more. He claimed the state ‘will never be ready’ to present their case against him, after his corruption trial was pushed back further. Proceedings will now take place in May, and Zuma has lashed out at the NPA’s ‘propoganda-inspired narrative’.

Bheki Cele slams officers for being ‘unaware’ of GBV

Police Minister Bheki Cele said members of the Saps are not fully equipped to handle reports of gender-based violence. As EWN report, Cele said they are formulating a plan that will see a dedicated unit to fight the scourge of GBV:

“We’re developing the programme to fight GBV. We’re developing a programme where we’ll have dedicated officers because when people go to the police station to report rape, you find an officer who doesn’t know the seriousness of the crime.”

SAA may only fly from May

SAA has notified trade partners that its suspension of flights will continue up to and including April 30. An interim SAA board is expected to be in place for the next few months..

This has thrown cold water over the hopes raised by the Minister of Public Enterprises’ prediction that SAA would exit business rescue by the end of February. The airline’s notification stated that the further suspension was due to the ongoing business rescue process and regulations pertaining to COVID-19.

Possible routes out of lockdown punted for South Africa

It now seems inevitable that the lockdown will get worse before it gets better for South Africa. After losing ground in the vaccine race, the country is also heading into its colder winter months – meaning that a third wave of COVID-19 is as good as unavoidable. Indeed, Price Waterhouse Coopers (PWC) predicts a rollercoaster ride for Mzansi throughout 2021.

The ‘baseline’ predictions pitch a tough slog through winter, without having to face the extremes of Level 5. Much like the downside, it also shows that restrictions will remain in place until 2022. From September onwards, none of the outlooks say that South Africa will be operating at anything tougher than Level 1, which is *something* of a silver lining.

Jacob Zuma, whose very appearance in Parliament used to be enough to spark unsavoury scenes in the chambers, has advised political representatives to show a little more respect to each other during their engagements. The temperature was cranked-up during Msholozi’s last year as president – and things haven’t really cooled since then.

Of course, the irony won’t be lost on politically-interested South Africans. Zuma has previously been accused of ‘holding Parliament in contempt’ by giving evasive, vague answers when quizzed about his links to state capture. Few will forget the time he boasted about being able to ‘meandos’ his way through tough questions.

Take a look at weather forecasts for all nine provinces here.

Stay one step ahead of the traffic by viewing our live traffic updates here. 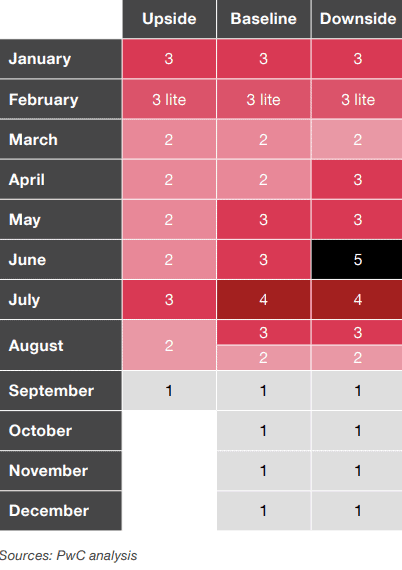