A duck named Dave has lost his penis which got injured and infected after it tried to have sex with his female friends 10 times a day.

LIB reports the owner of the duck, Josh Watson revealed antibiotics and painkillers were prescribed for Dave in October by some vet officials and he was also instructed to wash the duck’s penis daily and push it back in twice a day.

Sadly, there was no improvement in Dave’s condition as it tried to mate with his friends, Dora, Freda and Edith.

The duck’s owner thereafter made up his mind to castrate the duck, leaving only about one centimetre.

Giving an update of the health of the duck, Watson said:

‘He’s doing fine now, he’s quite resilient for a duck. The only downfall is that he’s lost his willy. I think he feels pretty upset about it.

‘I think he’s a nymphomaniac. He’s got a high sex drive basically. So I think that’s what caused it. He tries to mate with his female companions a lot. Every chance he can get.. I’d say between five and ten times a day, maybe more.’

‘He doesn’t stop throughout the year. Over winter he’s meant to calm down. The ducks stop laying eggs but he doesn’t stop mating. He just carries on.

‘I think his female companions do like him. They obviously sometimes get fed up with him and wander off. He does try at every available opportunity but sometimes he gets turned down.

‘One of them really doesn’t like him probably because of that. But the other two are quite receptive.

Vet Sonya Miles, who operated on Dave, said some ‘overuse’ had caused his penis to prolapse before he injured it and it became infected

‘It turns out Dave had been over-amorous with the ladies that he lives with which had caused his penis to prolapse.

‘This resulted in his penis getting traumatised and then pretty infected. He’d basically injured the tip of his penis and had a wound on it that had got infected.

‘Normally it goes back inside him once he’s finished [mating] but it stayed out and obviously when it’s out it’s bashed and stood on and pecked at and god knows what.

‘Female ducks can actually be quite aggressive and if they don’t want his attention then they will peck at anything including his penis. I think [his penis] took the brunt of it, unfortunately. It’s brutal.

‘He won’t be able to successfully breed which isn’t a problem for the way he is kept but it means he’ll lead maybe a slightly joyless life in comparison [to before].

‘On the face of it he was actually pretty oblivious to the fact that he’d lost his manhood. He was up and about and eating and doing his normal duck things immediately post-surgery.

‘I imagine once he realises what he’s missing he may be slightly more concerned. He’ll definitely still try to mate. It’s not going to stop him.

‘But at the end of the day it’s not going to stop him having a completely normal life. It’s not going to bother him too much. I felt sorry for him more than anything but also really pleased that his owners were so caring. It’s nice to have a client who is willing to do that much for their pet. A lot of people go “oh it’s just a duck” but he’s not – he’s a loved pet. 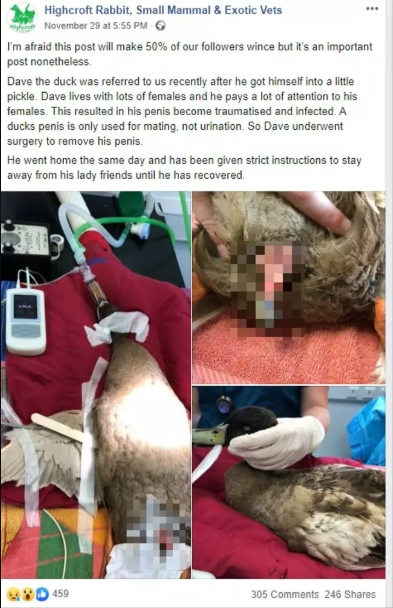 The post Penis Of Sex-Mad Duck Removed After Having Sex 10 Times A Day (Photo) appeared first on Information Nigeria.