Parts of South Africa were shaken by three weak magnitude earthquakes that within three hours on Saturday, 17 July. The Council for GeoScience in South Africa and Volcano Discovery detected the seismic activity in Mpumalanga and the Northern Cape.

South Africa was shaken by 44 earthquakes over the last 30 days, according to Volcano Discovery, the biggest of which was a 4.2 magnitude quake 38 kilometres southeast of Springbok, Northern Cape on 6 July.

The first weak magnitude earthquake struck 41 kilometres east of the Gert Sibande District Municipality in Mpumalanga at 15:17 on Saturday. It had a magnitude of 2.6.

A slightly bigger 2.7 magnitude quake hit 5.9 kilometres southwest of Kathu, in the Northern Cape, at 15:43. The Kathu quake was the biggest on the day.

The third quake, thus far, was recorded at 17:21. It had a 2.3 magnitude and struck 24 kilometres southeast of Bronkhorstspruit  in the Nkangala District Municipality of Mpumalanga.

Of the 44 earthquakes that the country experienced over the last month, only two had a magnitude of 4.0 or above, while there were 7 quakes between 3.0 and 4.0 and 35 quakes between 2.0 and 3.0. Earlier this week, on Wednesday, 14 July, three more weak earthquakes were recorded in the Free State and Gauteng. 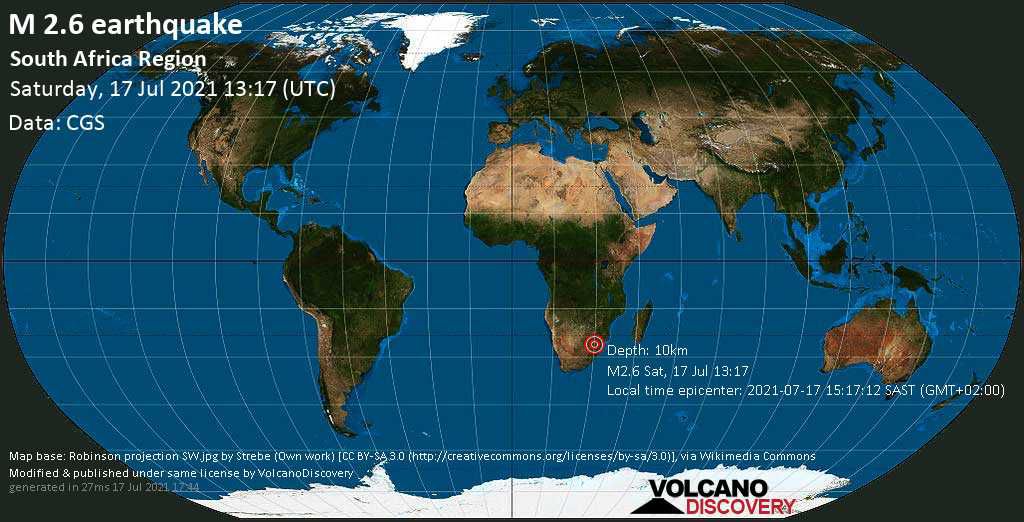