Duncan Mighty revealed he is in a state of confusion as he intends to find out how the car gift suddenly got to Nigeria in less than 28 days, which according to him, is impossible.

Information Nigeria recalls Idemudia had revealed that she got a Mercedes Benz as a gift in Dubai merely by responding to an unidentified “angel” on Instagram.

The ‘Fake Love” singer took a swipe at the actress by sharing her photo with the words,

“It takes nothing to be real. It takes 28 days to ship a car from Dubai to Gidi. Trying to figure out how this car take disappear as MERCEDES BENZ from Dubai and then land as 2009 Tokunbor Venza. White people please explain the technology behind this magic”.

Reacting to this, the actress fired back, stating that she has more than one car and went ahead to list the names of her three cars. 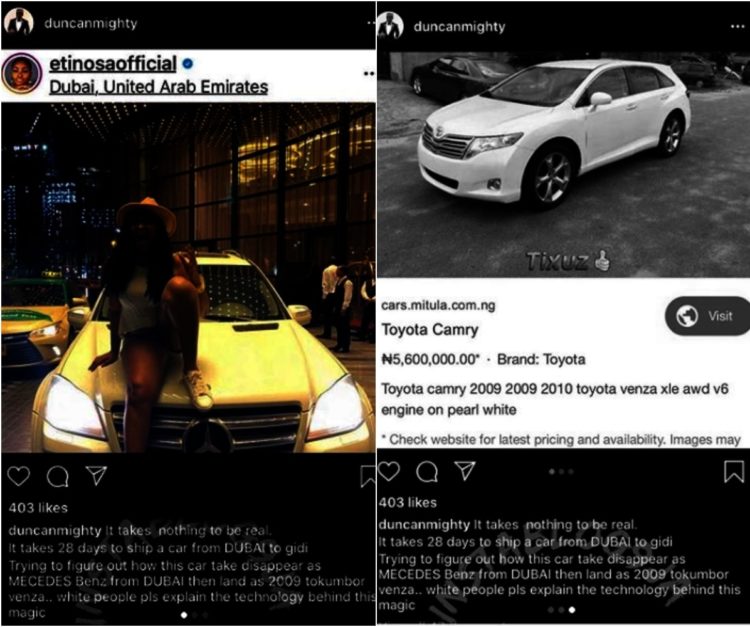 ANC’s John Block still in prison, says Correctional Services
Watch live: Ramaphosa to answer questions in the National Assembly
Police confirmed arrest of two teens in connection with Cape Town Train Station fire
Davido Reacts As Fan Explains Igbo Tradition To Him, Says He Might Loose His Son
Newspaper front pages from around the world, Monday 8 February 2021
Halle Berry In Heated Exchange With Fans Over Not Being Able To Keep A Man