Wrap up warm, wherever you are in South Africa – as most of the country is battling the bone-chilling impact of a severe cold front on Thursday. The weather system, which is bringing snow to the Cape provinces, has also pushed into central and northern regions of Mzansi today. Many forecasters have billed this as ‘the coldest day of the year’.

Those who will perhaps feel the freeze more than anyone are based in Gauteng. Johannesburg is facing its coldest day in roughly 10 years, as temperatures are only likely to peak at 7C. City residents will have to withstand near-freezing conditions throughout most of Thursday, as central and southern regions of the province fend off the frostbite…

ALERT: COLDEST DAY SINCE SNOW OF 2011 POSSIBLE IN JOBURG ON THURSDAY AFTERNOON DUE TO STRONG COLD FRONT WITH NEAR-POLAR AIR!!!

Where will it be freezing?

With Johannesburg and several other Gauteng suburbs failing to get anywhere near double figures today, the rest of South Africa is also prepared for the onslaught of these wintery temperatures. Apart from a few coastal regions, the plummeting mercury can be felt across the nation. Bloemfontein, for example, won’t get above 5C today.

But there is a belt across the Western and Eastern Cape respectively which will keep temperatures at the ZERO DEGREES mark for the remainder of the day. Rural land across both provinces will be left to shudder throughout Thursday. Meanwhile, more rain, floods, and snow are expected in the southwest over the next 24 hours or so. 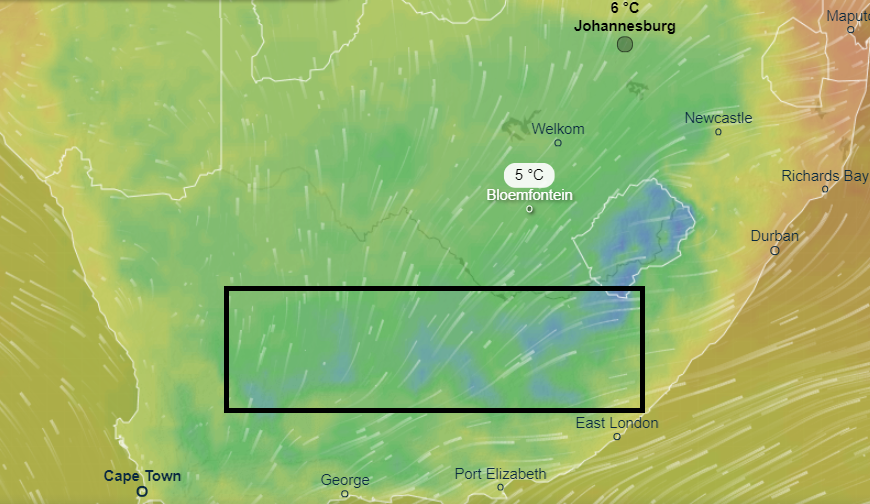